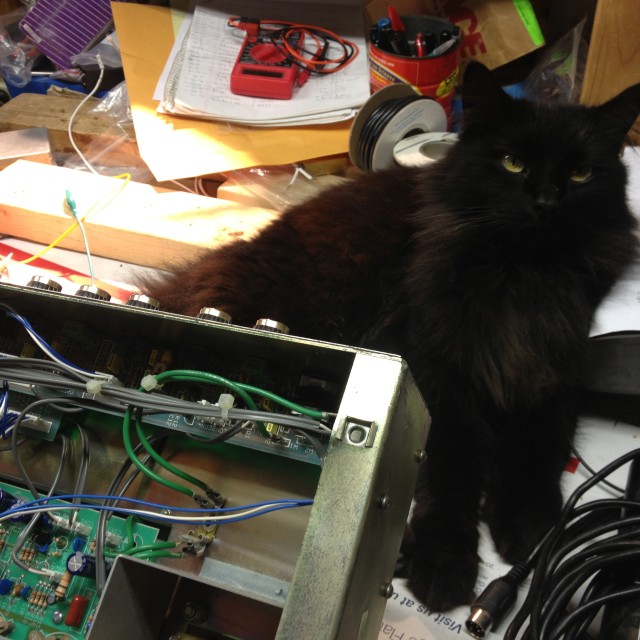 On Monday (April 8th, 2013) Bob and I headed up to Kempner, TX to meet with the amp genius Gerald Weber and his team. Bob’s Marshal amp needed some work and there is no better place to get a tube amp serviced than by Kendrick. We hung out for a while in their work-space and talked about music, guitars and amplifiers. This picture is of one of the “Kendrick-Kats” hanging out with Bob’s now gutted Marshal amp. Believe me, when we get that amp back its going to be better than new!

On the main assembly table were a slew of custom amps they are making for the Blue Man Group. I remember back in the day when I worked at BMG in Las Vegas. We used Vintage Orange amps for the Zither in the show and would blow them seemingly every other month. We had three of them and one was always in rotation to Gerald for service, one live in the show, and one for back up. Gerald sent us his prototype  for a “Blue Man Amp” that would out perform and out last those Vintage Orange amps. We beat the crap out of that amp for two shows a day every day and it held up without fail. It just never went down and never sounded bad. Of course we ordered more for the show and replaced the Orange amps.

Gerald had that original prototype amp in his shop and told Bob and I that since we had it in the show in Las Vegas it had done tours of duty in the Chicago, Orlando, and New York shows… it never went down EVER. He mentioned that he dosen’t even think they had to re-bias the tubes on that original amp. Gerald and his crew are now building copies of that amp for every show in the Blue Man eco-sphere including the new show in Brazil. I’m telling you. If you need a KILLER tube amplifier you’ve got to check out Kendrick Amps.

Bob got to play a few Kendrick guitars through a few amp/speaker combos and we both really fell in love with their 7-watt studio amplifier played through a closed-back cabinet. It was one of the purest, most beautiful guitar tones we had ever heard.  Really unbelievable. That little 7-watt amp is even being used by live players as it is unbelievably loud for its diminutive size and really sounds incredible.

We didn’t get to hear it, but Gerald showed me the new 300 Watt bass amp he’s working on and it’s a BEAST! I can’t wait to go back soon and hear that thing make the thunder. Tony’s going to HAVE to get one for his DoM arsenal.

We cannot stress it enough; Do yourself a favor and check out Kendrick Amplifiers.