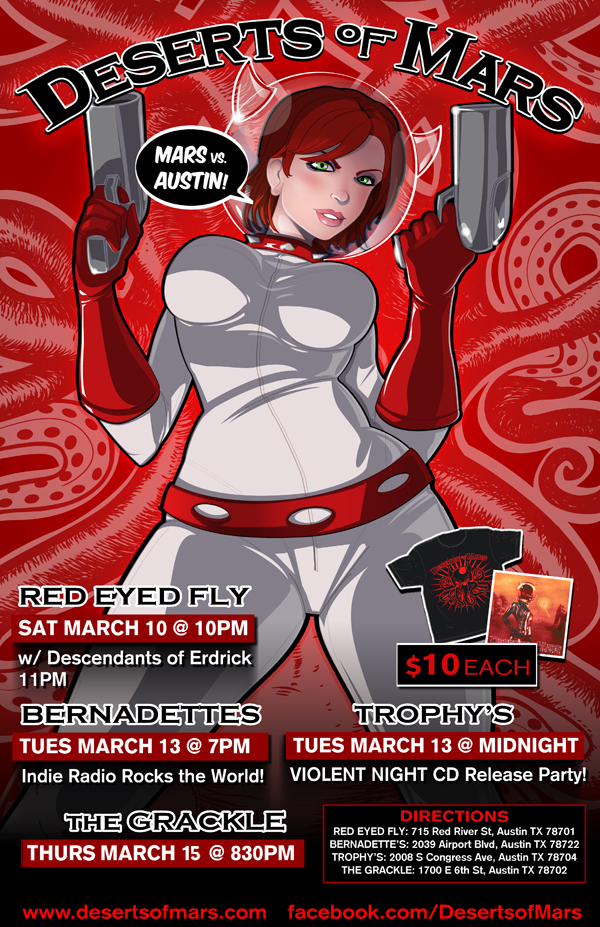 We’re playing four shows during SXSW so you will have ample opportunity rock out with us.

Saturday the 10th at Red Eyed Fly at 10:00, Two shows on Tues. the 12th, first at 7:00 at Bernadette’s for the Indie Radio Rocks the World 2 show then at Midnight at Trophy’s for the Violent Night CD Release Party and finally at The Grackle on Thurs. at 8:30 for the AFHC Grackle Rock II super rock show!!!

All of these shows are FREE except for the Saturday Red Eyed Fly show. TONS of awesome bands are at each one, so come out and rock with us. For updates and more info always check the Deserts of Mars Facebook page. We’ll be updating throughout the week. 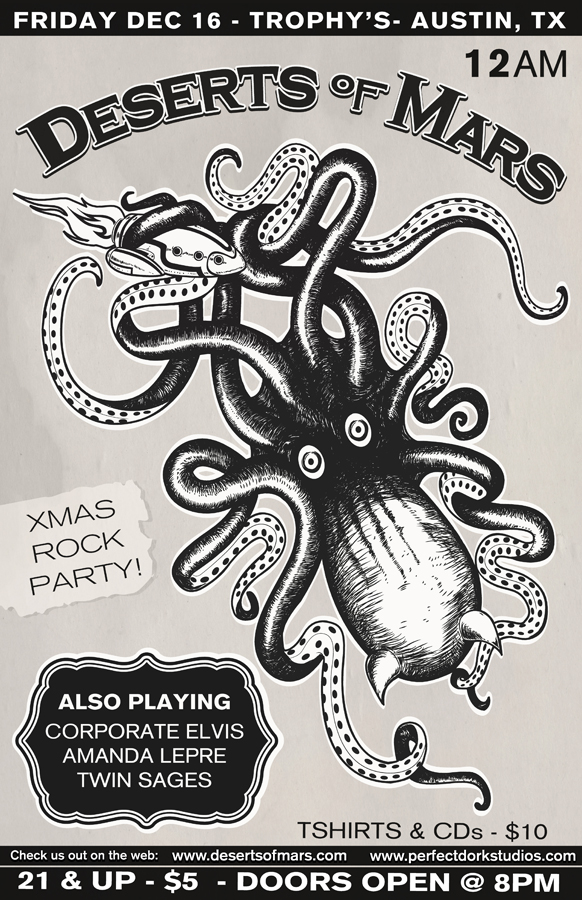 We’re pretty psyched to be closing out the year with a cool show at Trophy’s (2008 South Congress Ave). It’s been a while since we’ve played there and this lineup of friends is perfect to start ringing in the holidays! Come early and stay late… There’s free parking and the show is inside, so you can get out of the cold, into hot Rock and raise a drink (and your fists) high! All the details:

Music between sets programmed by DJ WOMAN FROM MARS

Comment on the Anti-Gravity Agency page or RSVP to antigravityatx@gmail.com with the words: “Life On Mars” for a chance to win free admission +1! (2 winners randomly selected will receive a reply on the day of the show, by 5pm.)

“I’ve wanted to coordinate a hard rock show for a while now, so this will be a December to remember, and the final Anti-Gravity booking! But I’m promoting local and touring talent and events with great booking agents in 2012, and hopefully in many years to come.”
~”DIY” Danna

We’ll have T-shirts and CDS if you want to give the gift of ROCK this holiday season and we might even have some extra giveaways. We won’t judge if you’re naughty or nice, as long as you come have a good time.

We are rocking out the year in style in December!! First up is Billy’s Birthday gig at Red Eyed Fly on Thursday Dec. 1st. Deserts of Mars goes on at 9:00 SHARP!! However, we would love to have you there at 8:00 to check out all the bands and celebrate Billy’s Birthday with us! Our friends in Egypt rocking back into action and we are super excited to be playing with them! Feel free to show your support and RSVP at the Facebook event page.

We also have a gig at Trophy’s on the 16th of December and will give you the details soon! It’s shaping up to be a killer lineup to rock into the holidays.

Deserts of Mars was interviewed by Mourning/Graveless of Aristocrazia Webzine, an Italian website that features tons of great bands! Here is the review of “Transmission” (in Italian) and here is the interview in English and Italian.

On a personal note, this is super cool to me. My great-grandparents came from Sicily to Texas, so having my first international interview be from Italy is fantastic!

Thanks to this interview, I was also introduced to Gustnado. This one man rock machine has some truly killer tunes. You really need to check out Frank Tudisco’s fuzzed out rockin demo!If you happen to live anywhere near him, join up so we can go to Italy and tour together.