Thanks to John L Robertson from Fuzz Goblin for capturing this. Our debut of “Black Leather” (one of the 5 songs on our new EP!) at our first show with Bradley on guitar (much thanks to Gravitoyd Presents ! ). The song has changed A LOT since we recorded it. (think of this as the prototype) but this is still rad. Rock on!!
https://youtu.be/Jf1y6gmGitk

We’re playing a rager of a show at Independence Brewing Co’s Summer Sesh II with some of our favorite bands/friends. We’ll be playing some new arrangements of songs from the upcoming Return from the Void EP and some old favorites. The lineup is:

Come join us for our second annual Summer Sesh Party. There will be a giant slip n slide, kiddie pools, a giant water balloon war, Hawaiian Shirt Contest, live screen printing from Underground Truckstop, food provided by Crossroads: Farm to Truck, and of course a stellar lineup of bands.

As always on first Saturday we’ll have our 3 for 10 wristbands.

Usually we allow well behaved leashed dogs on our patio, but please keep them at home on this day. It will be busy, hot, and loud. 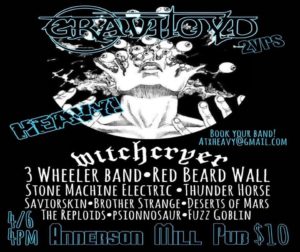 Deserts of Mars // Send More Gasoline from yukohfilms on Vimeo.

Hey Martian Maniacs!! It has been a while and we wanted give you and update on the state of Mars Metal. This past year or so has been akin to a mashup of “The Martian” and “Spinal Tap” mixed with a bit of “Apollo 13”. Never fear, Morgan and I have been writing as a 2 piece and while the sound is shaping to be a bit different than the DoM of the past, it is still always going to be Mars Metal – (Heavy, spacey, groovey, growly, and melodic, the only way we know how).

And now, we have our first video courtesy Maximiliano Contenti of Yukoh Films. Max is an all-around cool person that I met when he screened his film “High Five” (Relocos Y Repasados) and we hit it off, sharing a love of music and film. Over time he made this hard rockin’ video, which we hope that you love as much as we do. It’s certainly fueling OUR overdrive engines! Check it out and spread the word!! We hope to see you back on Earth in 2017!!! -Tony

Birthday show, and more plus some cool SXSW news

The riffs are flowing at the Mars homebase and we can’t wait to unleash them at new shows once the Mars Metal has been forged into sonic steel.

In the meantime, we have some awesome shows coming up including a show celebrating Tony’s birthday on February 20th. With Grail, Deguello, and Bellringer. 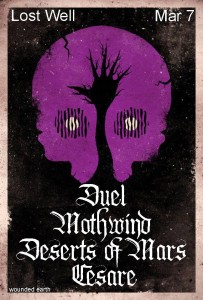 and to kick off more good news we are playing the The Worshiper Cabs SXSW Showcase
Thanks to Dusty Brooks and Wounded Earth Booking. TONS of heavy bands in an all-day riff fueled extravaganza!!!

We hope to see you out and about for some Mars Metal!